← The High Fat/Low Carb basic food list
Carbohydrates: How much is too much? →

I have just finished watching a really fascinating TED talk by Allan Savory. He starts his talk by stating that the grim reality is that a massive tsunami, the perfect storm, is bearing down on us. This is the result of rising population growth, land turning to desert and climate change. His talk offers a “simple message, a message which offers more hope than you could imagine”, he says. 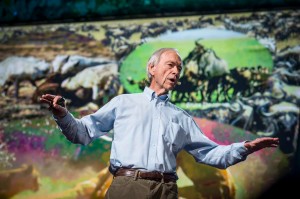 He believes that fossil fuels are not the only cause of climate change but that a big contributor is desertification of two-thirds of the earth’s land surface.

Savory goes on to explain that people accept the view that desertification is caused by livestock. But is it really? Didn’t humanity once believe that the earth was flat? Well, we were wrong then and we are wrong now.

Allan Savory has devoted his life to finding a solution to desertification and states that scientists have never really understood the process and the causes.

With dramatic pause he says, “there is only one option left, we need to do the unthinkable, we need to use livestock bunched together and moving using holistic planned grazing to mimic nature. In doing so we work with nature, at low-cost, to reverse climate change and feed the world’s starving”.

He ends his talk with the following statement, “I can think of almost nothing that offers more hope for our planet, for our children, for their children, and for all of humanity.”

Wow – talk about a paradigm shift and a radical idea! It would be completely amazing if this approach could provide a solution to climate change, desertification and starvation on this planet of ours. The slides that he shows of his successes thus far give me hope.

His talk resonated with me because it is all about going back to nature and the ways of the past before technology and advancements started messing with everything. Not to mention my excitement  at the future possibility of a good supply of naturally raised, grass-fed meat! Maybe the paleo/primal way of eating will become accessible to all through Allan Savory’s methods and will not only solve world hunger but our global health issues too.  We can only hope.

Link to the TED talk.

Passionately sharing information about the paleo/primal, high fat/low carb lifestyle that will rock your world! I am on my own journey to good health and a slim body. My goal? To enjoy the ride as life on this beautiful planet is just too short to do it any other way.
View all posts by Nicky Perks »

← The High Fat/Low Carb basic food list
Carbohydrates: How much is too much? →